I have been thinking a lot about biography recently, and reading lots and lots of them as I am presenting a workshop on writing biography in a few weeks time for the ACT Writers Centre. One of the issues I have been contemplating is the ethics of the biographer, and the respect he or she must show to the subject in telling their life story. I believe that a biographer holds a special responsibility of ensuring that, as much as possible, the subject’s voice is heard, and not drowned out by the biographer’s.
One of the books I read was Kate Grenville’s One Life. My Mother’s Story. 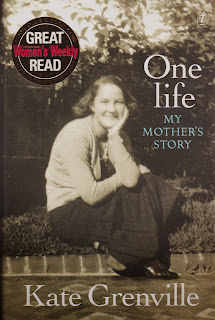 Nance Russell wrote in one of her many notebooks: ‘I’ve often thought about writing a book—other people do it all the time—it can’t be all that hard. Up till now I’ve never had the time or the right pencil but now that I have one foot in the grave, so to speak, it’s time to get on with it.’ She didn’t, but she left a legacy of notebooks and interviews recorded by her daughter, author Kate Grenville.[i]
Faced with this embarrassment of riches after her mother passed away, Grenville initially transcribed 100,000 or so of Nance’s, words and decided to organise it into a family record. she told Susan Wyndham, the literary editor of The Sydney Morning Herald, that ‘I knew it really mattered to Mum and I had this sense that this was a resource for the future that someone would find and treasure, for the very reason that this is about ordinary people’. The highly regarded author then tried to blend her mother’s writings and recollections, as well as her own memories and related research, but released that her mother’s story would appeal to a broader readership rather than to just the family. But at that point, Grenville realised that ‘I had a book with many different voices jostling to be heard’. And it seems that one of them was that of a much published writer who had developed her own particular style.
‘It wasn’t until about draft 22 or 23 that I took the radical and very emotionally difficult step of throwing out all the actual pieces of Mum’s memoir and tapes, so her verbatim voice is now embedded in sentences that I have written.’ The only time the reader hears Nance’s voice in One Life. My Mother’s Story is in the photo captions. And it is a shame as, from those, we gain an immediate sense of her humour and vitality. Grenville ‘felt as if I was pushing her away’ but to me it was more than that. She was in effect silencing her mother when her mother had left a significant written and oral legacy. There is no denying the book’s literary merits, and I enjoyed it, but the novelist that is Grenville, the author of 13 other books had taken over. ‘That step’ of denying her mother her own voice ‘has made it into a book, as opposed to a compilation of family stories.’ But what sort of book?[ii] Is it really her mother’s story? Or Grenville’s.

Kristen Alexander
Kristen is currently a PhD candidate at University of New South Wales (Canberra) researching the experiences of Australians in Stalag Luft III and welcomes contact with anyone with family connections to former SLIII prisoners. Kristen’s website is www.kristenalexander.com.au She has been writing about Australia’s aviation history since 2002. Allen & Unwin published Clive Caldwell Air Ace in 2006 and Jack Davenport Beaufighter Leader in 2009. Barrallier Books published Australian Eagles in 2013. NewSouth published Australia’s Few and the Battle of Britain in September 2014. Pen & Sword published the UK edition in April 2015. Jack Davenport Beaufighter Leader was in the RAAF Chief of Air Force’s 2010 Reading List. Australia’s Few was included on the 2015 list. Kristen won the Military Historical Society of Australia’s 2012 and 2013 Sabretache Writer’s Prize. Her articles and book reviews have appeared in Flightpath, Aircrew Book Review, Sabretache, Britain at War, and Aviation Heritage. Taking Flight. Lores Bonney’s Extraordinary Flying Career was published by the National Library of Australia in March 2016.