Sneak peek of Australia's Few and the Battle of Britain.

I am so excited. Australia's Few and the Battle of Britain has arrived. What wonderful cover art!

The book tells the remarkable stories of eight young Australians who fought in the Battle of Britain: 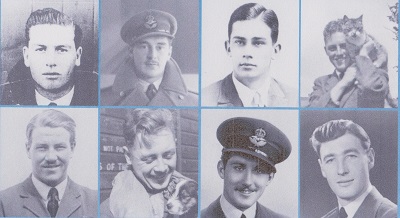 Jack Kennedy (238 Squadron)—Sydney born and bred; Spitfire and Hurricane pilot, the first Australian to die in the Battle

Stuart Walch (238 Squadron)—Hobart born and bred; Hurricane pilot, known as the father of his squadron

Dick Glyde DFC (87 Squadron)—Perth born and bred; Australia’s first internee of the war; Hurricane pilot who flew in the Battle of France and died on Eagle Day

Pat Hughes DFC (234 Squadron)—Monaro born and bred, memorialised in Cooma and Kiama, raised to adulthood in Sydney; Spitfire pilot and Australia’s highest scoring Battle ace who died defending London on the first day of the Blitz

John Crossman (32 and 46 squadrons)—Queensland-born and Newcastle raised; Hurricane pilot who was determined to fly at all cost

Bill Millington DFC (79 and 249 squadrons)—English born but Adelaide raised; Hurricane pilot and exemplar of chivalry who avoided crashing into a village; died on the last day of fighting

Desmond Sheen DFC and Bar (72 Squadron)—Sydney-born and Canberra raised; Spitfire pilot and first Australian to engage the enemy in combat. Baled out twice, and survived.


Perhaps you might like to have a sneak peek of what the book is like ... but first, you have to endure some shots of me gloating over it ... 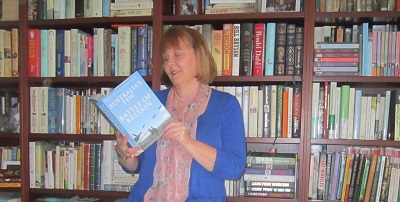 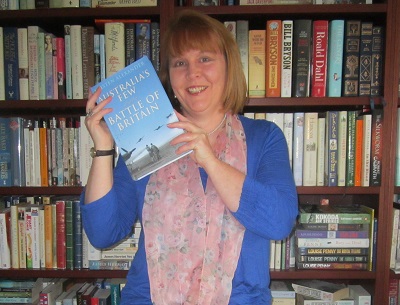 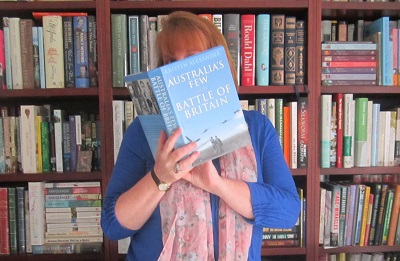 OK. Now for the book itself.


As you can see, it is very handsomely produced. Hard cover dust wrapper, illustrated boards, stitched page sections (so it won't fall apart if you are a hard reader), a goodly number of b&w pics, two maps and some cleverly designed chapter header logos. For the historians, it is fully endnoted with a detailed bibliography of primary and secondary sources.  And an index. All in all, I am thrilled with it. 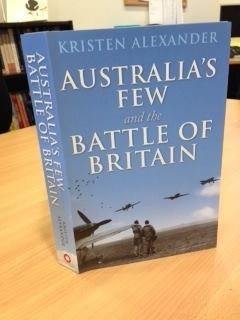 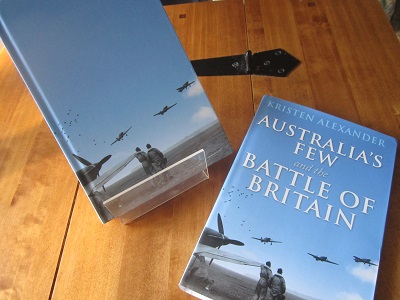 What do you think of the frontispiece illustration?

That depicts Pat Hughes' last moments in combat. I was thrilled to receive permission to use this from the man who commissioned the painting, based on their father's eyewitness account of the battle. 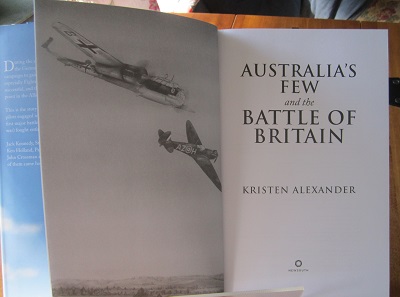 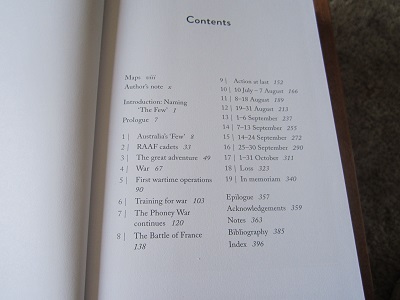 The table of contents gives the overview of the book but it is only when you read it that you will gain a true sense of the narrative sweep.


It was difficult selecting the photos and took weeks to make up my mind. I think the end result is mighty impressive. 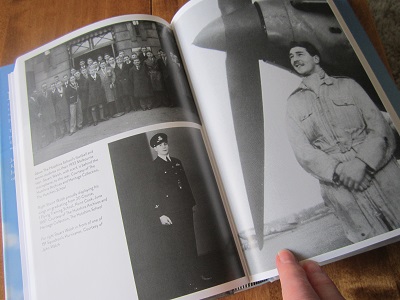 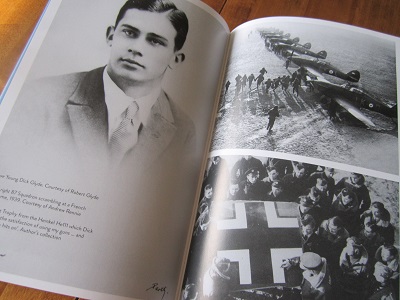 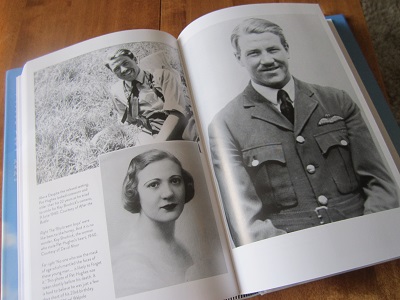 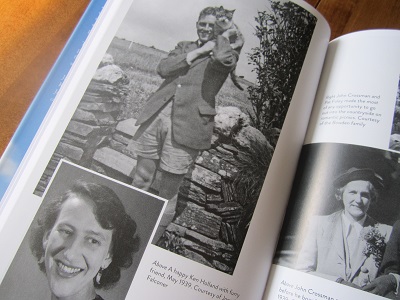 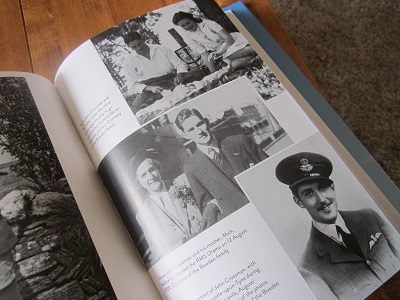 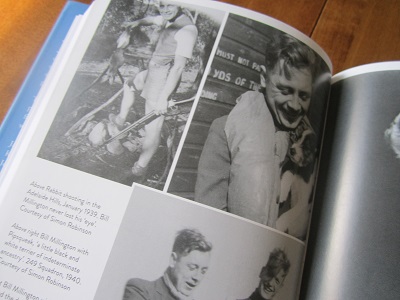 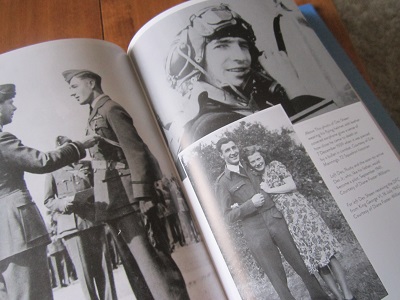 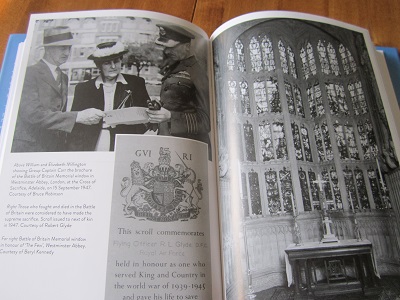 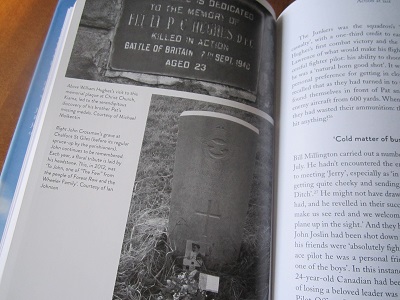 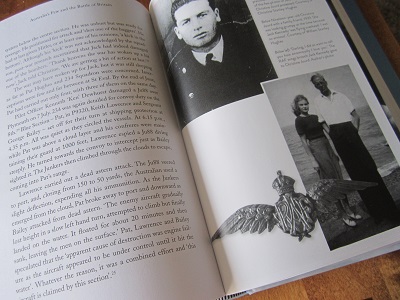 Do you see the wings brooch in this photo?

That was given to me by Jack Kennedy's former fiancee. I treasure it.

I was so pleased when NewSouth's designer used it as the basis for the chapter headers (see below).

It was all bit of a coincidence too, in that I had separately commissioned a graphic designer to come up with my personal writer's logo which includes a stylised set of wings (see at the top of this post). I love how they all relate. 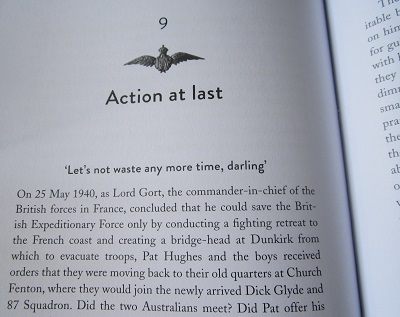 Here are some extracts from the book. 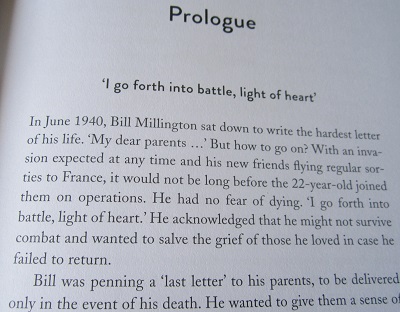 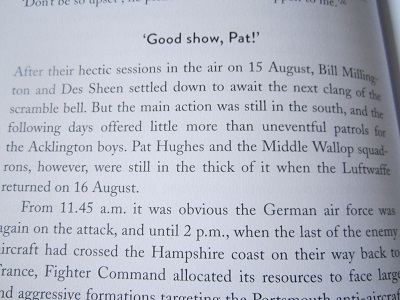 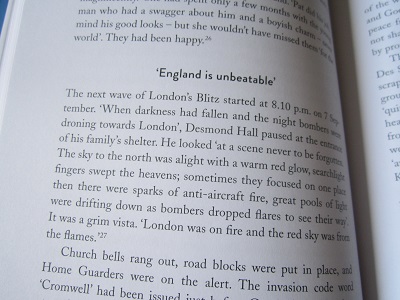 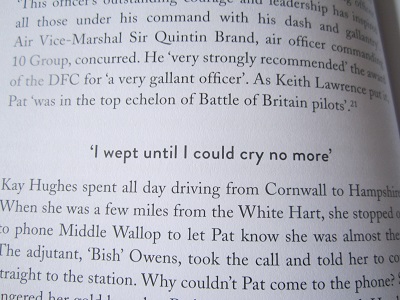 Australia’s Few and the Battle of Britain is available now with a recommended retail price of $A49.99 from all good booksellers throughout Australia. Naturally, Alexander Fax Booksellers will stock signed copies. Postage and packaging will be additional. Australia's Few and the Battle of Britain will be published in the United Kingdom by Pen and Sword at a later date. (I haven't been told the publication date yet) If you don't mind waiting a bit, you will be able to purchase it from your local bookshop in Britain as well.

If you prefer to order via your favourite local (Australian) bookshop, here is what you need to tell them:

I look forward to sharing with you what I have discovered about Jack Kennedy Stuart Walch, Dick Glyde, Ken Holland, Pat Hughes, Bill Millington, John Crossman and Des Sheen. I will of course tell everyone I know about Australia’s Few and the Battle of Britain. Details are already on my website, and that of Alexander Fax Booksellers, and on our Facebook pages. Please help spread the news to your family and friends, and anyone interested in Australia’s aviation history, by word of mouth or social media, so that more people can learn of the bravery of these young men, and their part in the world’s greatest air war.


Before I sign off, I want to share one last thing. Pat Hughes' favourite song was 'Where or When', by Richard Rodgers and Lorenz Hart, which featured in the 1937 musical and 1939 movie Babes in Arms. In it, a young couple who meet for the first time are instantly struck by the feeling that they have been in love before, but they can’t work out where they met, or how long ago. Their strong impression of déjà vu, along with their immediate attraction, create the sense that they belong together. Here is my favourite version of that lovely, evocative song.

I hope you have enjoyed the sneak peek of Australia's Few and the Battle of Britain.  It is my fourth book and I think it is my best.

Posted by Kristen Alexander at 21:42